language is who we are

The preservation and use of the surviving Indigenous languages have become a critical issue for many communities as they work to retain the ties to the collective memory that language provides. 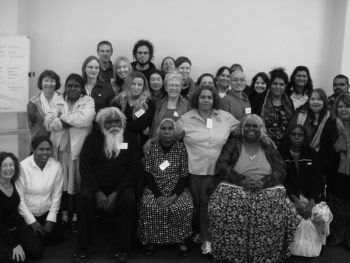 Only just over half of the estimated 250 original languages are still spoken and many are at risk. It is now appreciated that the benefits of traditional language include its ability to restore self-esteem, the opposite of being taught to be ashamed of one’s culture. Wangka Maya Pilbara Aboriginal Language Centre, like many others in Western Australia and the Northern Territory, grew from grass-roots action in the 1980s by people who refused to be ashamed.

In 1987 Bruce Thomas and others in the Pilbara were concerned that their languages were being lost. Initially with no government support, they worked together to compile word lists. After incorporating in 1989 they were able to access funding to employ a linguist who works with the community to record language and compile dictionaries.

Wangka Maya continues work on the 31 languages of the Pilbara region. They now publish storybooks, CDs and DVDs—used widely in schools to encourage the learning and preservation of language.