Before the 1967 Referendum many people believed that the social and economic inequality under which Indigenous people lived could only be properly addressed through constitutional change. 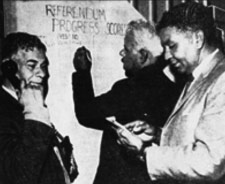 Report on the Referendum results includes a photograph of George Abdullah, Jack Davies and Charles Pell recording the progress of the vote at the Aboriginal Centre in Beaufort Street, Perth, May 29 1967.

At a public meeting in 1957 Jessie Street and others launched a petition requesting the Australian parliament hold a referendum to remove particular clauses from the Constitution. A referendum is a way of determining citizens’ support for a change to the Constitution, most often as proposed by government. In a referendum voting is compulsory, and the vote must return a majority in a majority of states for the change to be carried.

Despite collecting 80,000 signatures in 1957 it took a further 10 years of perseverance, lobbying government and educating the community. Activists, spearheaded by the Federal Aborigines’ Advancement League and the Federal Council for the Advancement of Aborigines and Torres Strait Islanders, campaigned for the deletion of the only two references to Aborigines in the Australian Constitution:

Section 51:
The Parliament shall, subject to this Constitution, have power to make laws for the peace, order and good government of the Commonwealth with respect to:
(xxvi) The people of any race, other than the aboriginal people in any State, for whom it is necessary to make special laws. 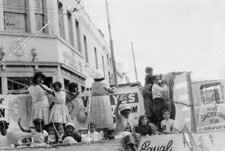 Aboriginal rights activist and community worker Aunty Celia Smith (in hat with back to camera) with Granny Monsell (waving) on May Day float campaigning for a ‘YES’ vote in the 1967 Referendum, Brisbane, 1967.

The activists believed these references discriminated against Indigenous people, and their removal would lead to a new era of recognition, justice and equality.

In 1965 University of Sydney student Charlie Perkins led the Freedom Rides, where students travelled to various NSW country towns and challenged discriminatory practices, such as segregation in pubs, theatres and swimming pools. They put a media spotlight on the living conditions of Indigenous people which shocked many Australians.

Increased national awareness, together with relentless petitioning and broad community campaigning, led to the request for a referendum being granted. On 27 May 1967 the Australian people returned a resounding ‘YES’ vote by 90.77%. Aboriginal affairs became a Commonwealth matter, and various state native welfare acts—which had maintained state and mission control of Aboriginal life—were repealed.

It is commonly believed that this referendum was about the right to vote. In theory at least Indigenous adult men had been able to vote, in some circumstances, in all states except Queensland and Western Australia, since the mid-1850s. In South Australia, some women were given the right to vote in 1895. In practice most Indigenous people were excluded from the electoral rolls after Federation, but the Commonwealth gave them the right to vote in federal elections in 1962. The 1967 Referendum was when Indigenous Australians were acknowledged as deserving of complete equality under Commonwealth law.