at the core of culture

‘Connection to country and the ties we have to our land is as important to us today as it was to our ancestors.’

For Indigenous people, the land is more than soil, rocks or minerals; it is ‘country’—a place that sustains, and is sustained by, people and culture. At birth, people are associated with specific places that remain at the centre of all spiritual, social and economic wellbeing. The use of the term ‘country’ refers to this expanded idea of land.

‘Country is a living entity with a yesterday, today and tomorrow, with a consciousness and a will toward life.’ 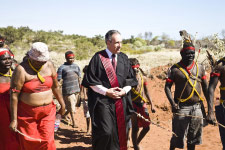 The return of land to Indigenous people through native title claims is often a contentious issue. As defined by the National Native Title Tribunal, native title is the recognition by Australian law that some Indigenous people have rights to and interests in their land that come from their traditional laws and customs.

Negotiations between Indigenous community leaders and state and federal government, pastoralists, mining concerns and other land users can take many years, and often involve considerable tension.

Despite the difficulties, the formal recognition of Indigenous native title acknowledges the ongoing relationship Indigenous people have with the land. It also provides them with the opportunity to create sustainable, long-term benefits for their community, and to reaffirm their cultural identity and heritage.

‘Everything about aboriginal society is inextricably woven with, and connected to, land…you take that away and you take away our reason for existence.’

In 1992 the High Court handed down the Mabo Decision, which recognised the native title of the Meriam people from the Murray Islands in the Torres Strait. It was the first time the native title rights of Indigenous people were recognised at law. In response to this decision, the federal government passed the Native Title Act 1993 (Cth) which established a national system for the resolution of native title issues.

Tribunal member Mr Caitlin called the process exemplary: ‘This was a conflict-free mediation to the extent that it was conducted with the greatest harmony between the parties at all times.’